Victorian style homes and Victorian architecture in general came into development during the reign of Queen Victoria.

Victorian style homes focus more on aesthetic and beauty rather than practicality. This home style emerged from the grandiose and detailed Gothic style. Technological advancements from the Industrial Revolution, such as steam-powered mills, reduced material costs and sped up manufacturing. Because of this, Victorian homes became more lavish towards the latter part of the architectural trend. There is no doubt that our contemporary reality of design is remarkably different. While the Victorian design may have fallen out of style, Victorian style homes continue to be common in many historic communities. 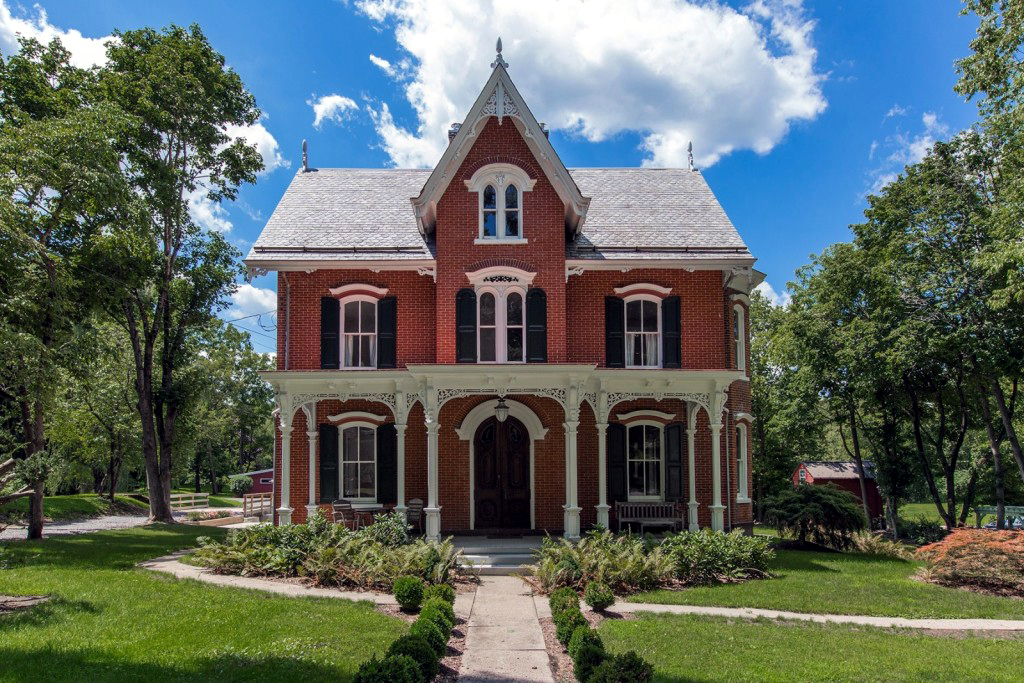 The Gothic Revival home style that existed from 1840 to 1880 was modeled after the grand cathedrals and castles of Europe. It is part of the mid-19th century architectural romantic movement, which shed light on the appreciation of medieval design. Styles prior to this one took inspiration from Greek and Roman design, making Gothic Revival a real departure from what people had grown accustomed to. The abundance of lumber, as well as factory manufactured architectural trim, inspired the American twist on wood-framed Gothic Revival homes. Characteristics of this home style include pointed arches, which are used for windows, doors, porches, dormers and roof gables. Additional characteristics would be steeply pitched roofs with front facing gables. Usually these have lacy wood trim called vergeboards or bargeboards, but it is more commonly known as gingerbread trim. Siding on these types of home is usually vertical, as opposed to horizontal. Porches have decorative turned posts or slender columns. 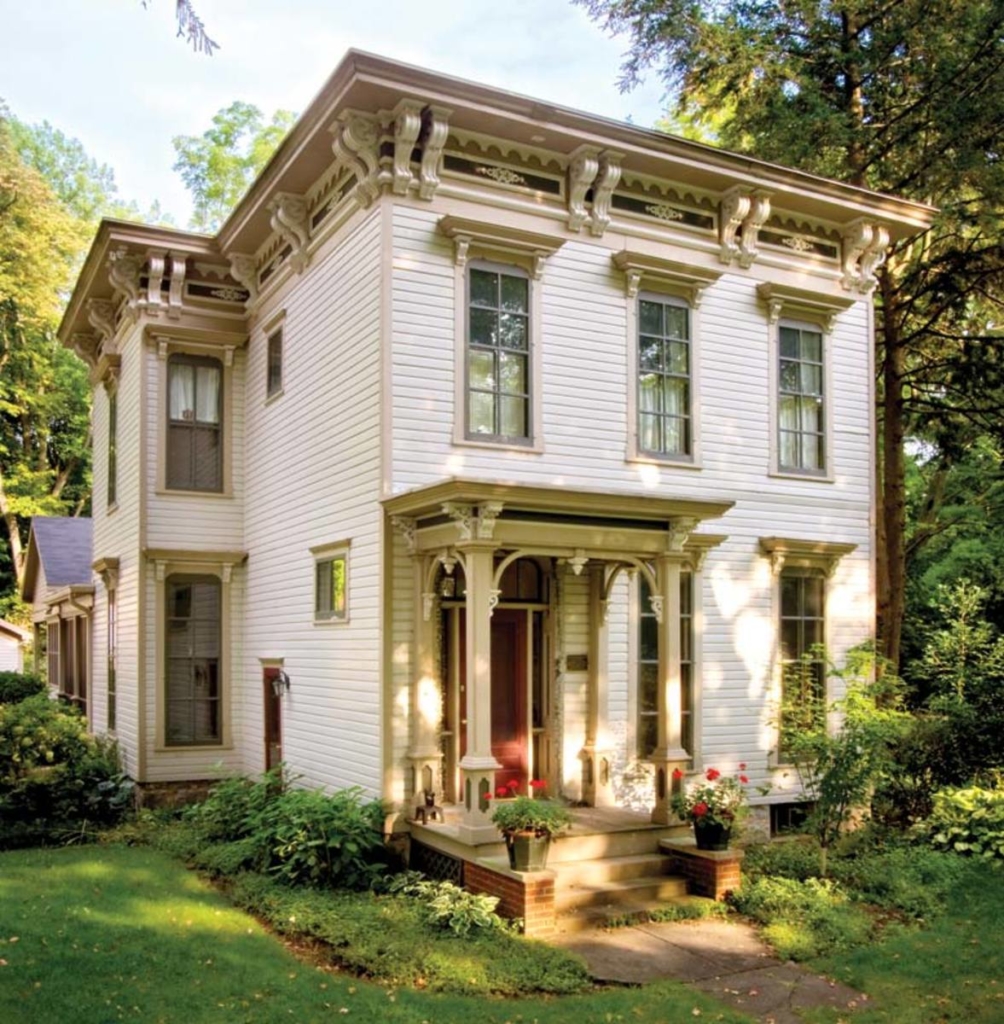 The Italianate home style was built from 1850 to 1890. Italianates are known more for their elaborate ornamentation than the structure of the home itself. They have a plain rectangular shape, with an exterior made of brick, stone or stucco, and are usually two or three stories tall. Cornices, windows, porches and doorways are the most decorated. Italianates have a slightly tilted roof, wide eaves, and a set of embellished brackets or corbels to match. Windows are tall, slim and often rounded on top. Interestingly enough, first floor windows are taller than the windows on upper levels. Shutters don’t touch these types of homes, instead they are replaced with pedimented windows. Single-story narrow columned porches were common for these homes. 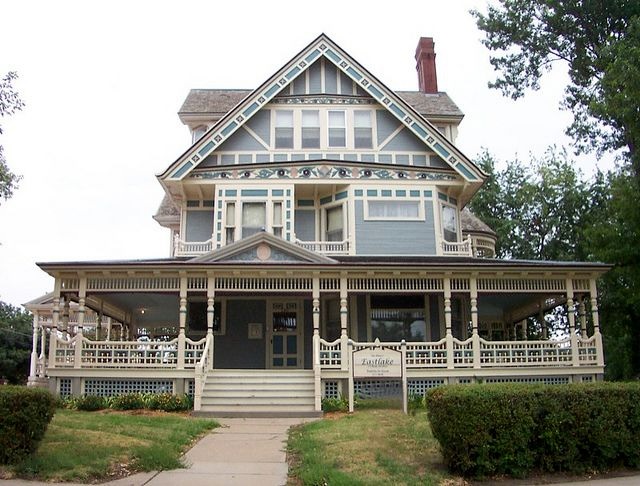 Some feel that Stick-Eastlake homes, which were primarily built in 1860 through 1890, are a blend between Gothic Revival and Queen Anne homes. Others feel it is an elaboration on the highly respected gothic style, void of its most defining features. When you think “Gingerbread House”, what do you envision? Is it this? Stick-Eastlake homes are undeniably that of Gothic influence, however are also born out of newer construction techniques of the time period. Balloon Frame Construction involved the use of long, vertical 2”X4”s for exterior walls. These studs would extend two stories from the foundation to the roof. It was rumored to have been invented in 1833 by George W. Snow, a carpenter from Chicago. This style of wood-house building required fewer carpenters which encouraged adoption of the system. The Eastlake home style is recognized by the simple layout which is typical of Gothic design. They are often adorned with trusses or decorative shingles on gable ends. Brick chimneys on these homes were large and bold. Wrap around porches were standard and not surprisingly, were later incorporated into what we would know as the Queen Anne home. Another common feature would be intersecting roof planes. The most distinctive feature of this home is the vertical, horizontal or diagonal planks which are placed on exterior walls. Very elaborately decorated homes of this type are referred to as Eastlake, named after furniture designer Charles Eastlake, who was known for his favorite embellishment, the spindle. Homes like this have become uncommon. One of the reasons is because of the use of balloon framing; homes like this are incredibly susceptible to fire. The second reason being the expense of maintenance expected with all of its elaborate details. 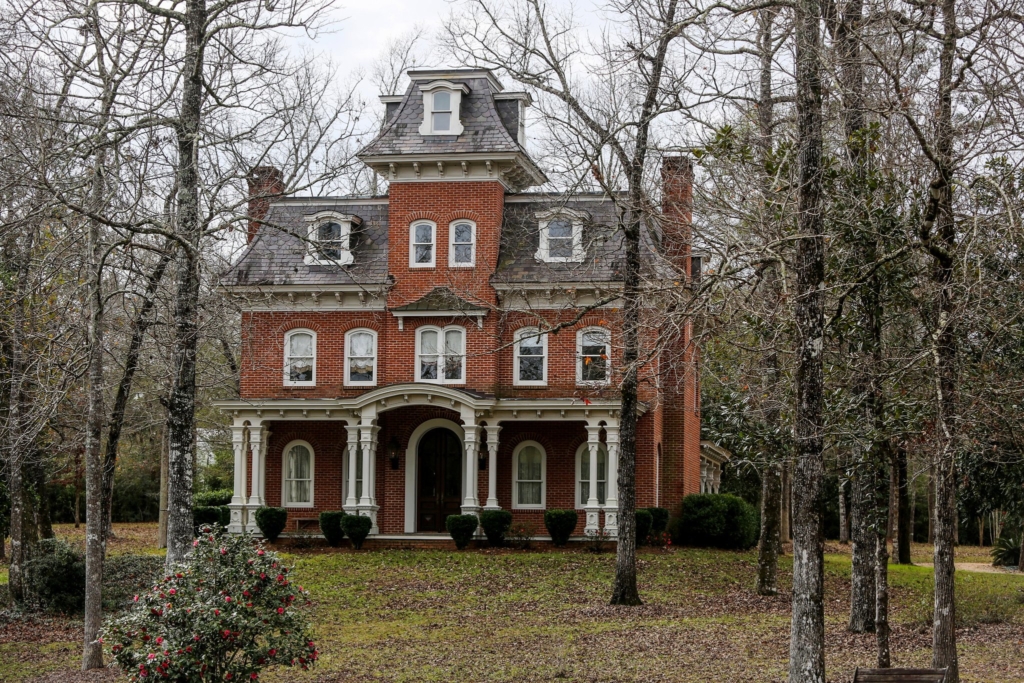 Second Empire homes, which were built between 1865 and 1880, can be traced back to France, where emperor Napoleon III had his reign from 1852 to 1870. Because these homes mirror the architectural style that replaced the once medieval streets of Paris, they were usually designed to be quite large. Because of this, they were generally reserved for the more affluent parts of the country. Second Empire homes have a lot in common with other Victorian-era homes, such as the use of varied ornamentation. Second Empire homes are of square or rectangular form, are incredibly symmetrical, and usually have visually intriguing towers. Some homes utilize wood quoins at the corners, and an abundant use of wood trim along windows and doors. Roofs of this home style, which are mansard roofs, provide a lot more space, allowing for a whole additional floor as opposed to an attic. The roofs almost always has slate shingles. Serving as a central feature, a set of double or triple windows are usually placed above the entrance. Entrances are usually adorned with a porch or elaborate canopy. They’re usually elevated and involve steps, and have double doors or either an extra wide single door.

For more French style homes check out our piece on that here: 7 Types of Elegant French Style Homes 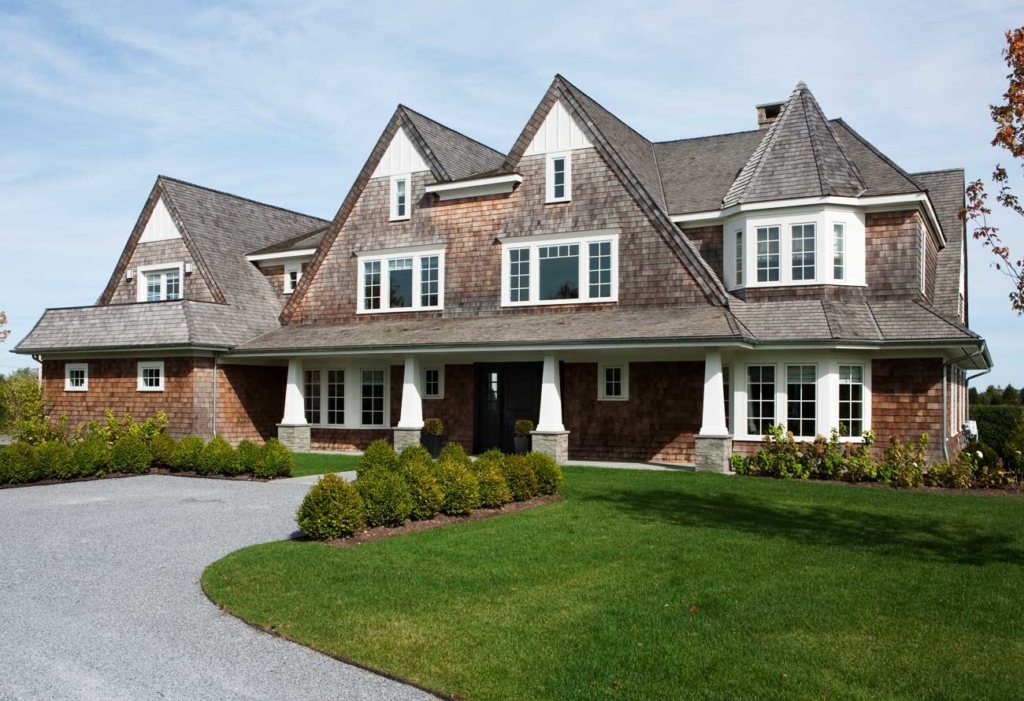 Shingle homes, developed in New England, which were popular from 1875 to 1910, are known for their wood construction and exterior wooden shingles. Their porches, balconies and large windows encouraged a life to be enjoyed among the outdoors. Due to the range of forms that could be found within this structure’s design, a home of this type was often out of range for the average homeowner, making the shingle home style rather high-fashion. In some ways, shingle homes would appear to be against what most other Victorian homes embraced, and that would be excessive decoration, which it lacked. The concept here was to tie the various shapes of the home together with the use shingles. Shingles offered some versatility of their own. They could be stained, painted or weather naturally. Roofs are rather complex and tend to vary with this home style. 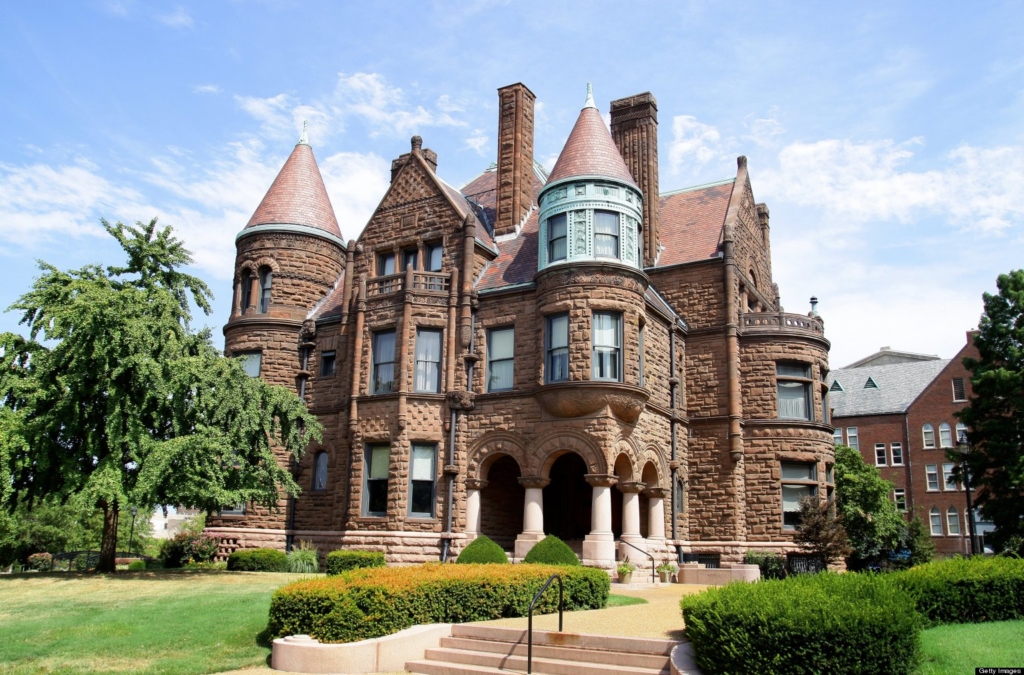 Samuel Cupples House is a historic mansion in St. Louis, Missouri, constructed from 1888 to 1890 by Samuel Cupples, a wealthy businessman. It is now a museum on the campus of Saint Louis University. (Wiki)

The eclectic Richardson Romanesque home style, which was named after architect Henry Hobson Richardson, spanned a decade between 1880 and 1890. Unlike many other Victorian style homes, this style was influenced by the ancient Romans but Richardson’s own personal twist was what gave such importance to his work. Because he was so fascinated by all things medieval, his works sought to evoke a sense of presence. Unlike many others, to Richardson architecture was a fine art. Richardsonian Romanesque buildings consist of solid masonry stone work. Limestone, granite, and sandstone were common. Brick was also often used in conjunction with these materials. Roofs have a hipped roof with lower cross gables. Windows and doors have round arches, which are a key feature of the Richardsonian Romanesque style. These round arches are particular however, in that they have to be true semi-circles. Windows of three or more were usually coupled together. Windows were usually recessed deeply into the stone and had one pane of glass. The entrance would be accentuated with arched doorways, in which brick was commonly grouped in interesting patterns, along with small columns on each side for further emphasis. Henry Hobson Richardson was most well known for his masterpiece the Trinity Church in Boston (1872-1877) which was designated as a National Historic Landmark. While there are Victorian style homes that fall within the Richardson Romanesque ideal, this design was more commonly for reserved for churches and chapels, service-related buildings, educational institutions and libraries, as well as civic buildings. 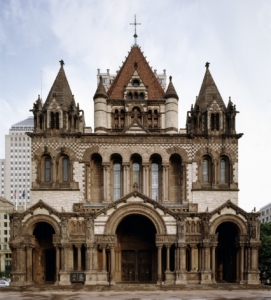 Trinity Church, designed by architect Henry Hobson Richardson, is the only church in the United States and the only building in Boston that has been honored as one of the “Ten Most Significant Buildings in the United States” by the American Institute of Architects (AIA) (Wiki) 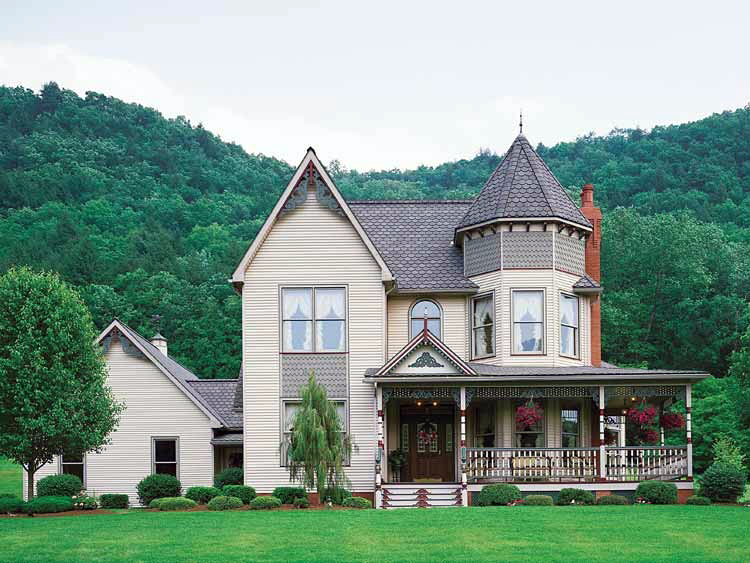 One of the most certainly striking Victorian style homes is known as the Queen Anne. While Queen Anne homes certainly fall under the Victorian brand, these were built from 1870 to 1910, which was during the much latter portion of Queen Victoria’s reign. Homes like these are 1-3 stories and asymmetrical, and often L-shaped. Roofs are cross-gabled or hipped, and medium pitched roofs came into play after 1900. There is an abundance of spindlework, half timbering and patterned masonry. A formal entrance hall or vestibule is to be expected. Porches are wrapped. Rooms are compartmentalized, and round and octagonal rooms are actually common. There are towers and turrets (smaller towers) placed at the front corner of the facade. Windows are single-paned and double hung, although later houses may have more curved windows as well as stained glass. Probably one of the most unique Victorian style homes one will ever come across, it is most well known for its grand ornamentation. 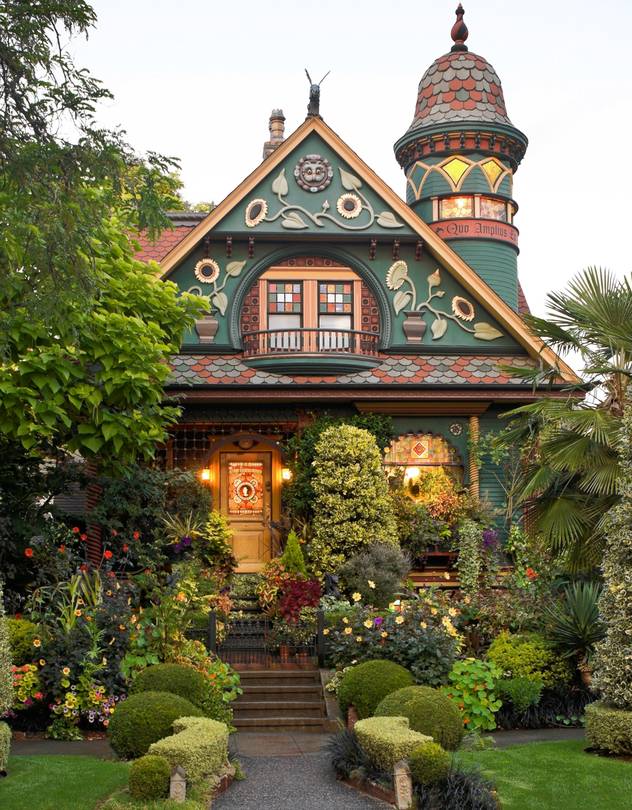